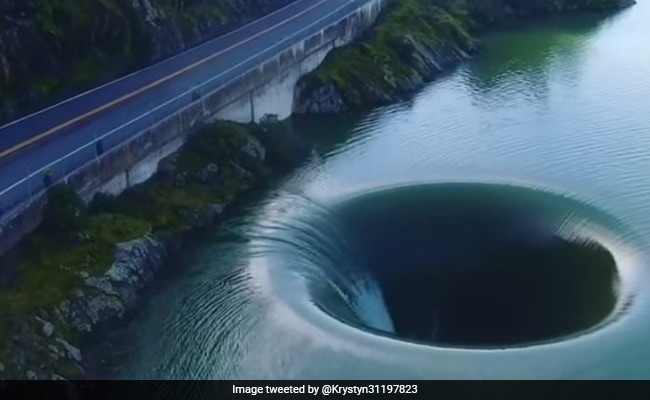 The portal functions as a drain hole swallowing around 1,360 cubic metres of water per second.

A bizarre portal with a spinning vortex effect has opened up in a lake in the United States once again. According to Express, the opening of the giant 72-feet-wide hole took place after water levels in Lake Berryessa in eastern Napa Valley, California, got too high. Now, the excess water can whirlpool into the huge hole and create the spectacular spinning vortex effect.

The baffling vortex, which is dubbed the “glory hole” or “portal to hell”, functions as a drain hole swallowing around 1,360 cubic metres of water per second when the lake rises above 4.7 metres. This is what creates the spinning vortex effect and it has once again been spotted on the surface of the lake.

Express reported that the engineers deliberately built the incredible portal back in the 1950s as an alternative to the more common chute. This has been in use to control the flow of water out of a dam or a levee. Keeping this in mind, the architects constructed the drain-like feature in the dam as it narrows the gap between the cliffs, where it is situated.

Now, the portal has garnered itself quite a reputation. Back in 2017, the Glory Hole drew hundreds of spectators who came to watch the fascinating spectacle of the portal opening up. It is to mention that the lake reached its full capacity n 11 years back in 2018. But the portal opened again in 2019 after a season of heavy rainfall. Notably, Lake Berryessa can hold around 52 billion gallons of water before the excess begins to flow into the spillway.

The portal is roped off and prohibits swimming or boating to ensure the safety of visitors. The safety precautions were put in place after a woman was killed after being sucked into the vortex in 1997. However, today, it is difficult to get close to “Glory Hole” due to the barriers.