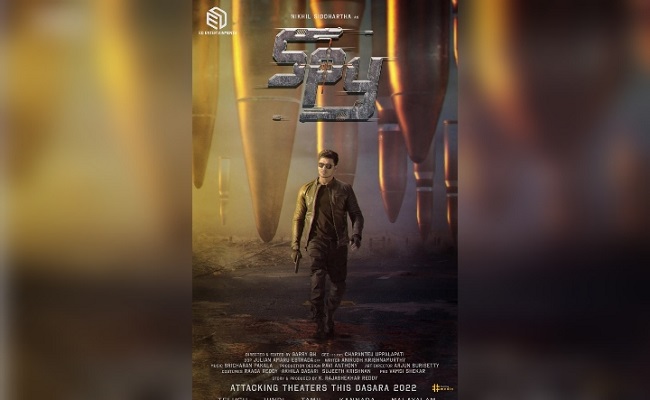 Nikhil is presently starring in a spy action thriller under the direction of popular editor Garry BH on the latter’s debut directorial venture.

The makers today announced title of the movie through this poster. Spy is the title finalized for the movie produced by K Raja Shekhar Reddy on Ed Entertainments with Charan Tej Uppalapati as CEO.

The title and the first look poster portray the film’s theme and Nikhil’s character. All we see here are guns and bullets.

Nikhil looks classy and stylish in the poster in all-black outfit, though he gives serious expression. Walking gracefully, he’s seen carrying a short gun in his hand.

Sports a different look, Nikhil is playing a spy for the first time. The first look poster is action-packed and gives an impression that the film will be high on action.

Iswarya Menon is Nikhil’s love interest in Spy that will have Pan India release and the makers have announced to release the movie during Dasara.