SkyFOX was over a bizarre chase where the suspect plowed through a fence, driving along the train tracks, ditching the SUV they were accused of stealing and then trying to hop on an incoming train. The wild sequence of events drew Grand Theft Auto video game comparisons on social media. MORE: https://bit.ly/3Egw4IR

LOS ANGELES – A pursuit suspect has barricaded himself in a vehicle on train tracks in Boyle Heights following a chase with deputies.

The Los Angeles County Sheriff’s Department first responded to an assist call from a railyard area near Noakes Street and Calada Street in the City of Commerce a little before 2:30 p.m. Friday.

The vehicle is believed to be stolen.

SkyFOX was over a bizarre scene where an SUV plows through a fence and starts traveling along the train tracks in the South Los Angeles area. 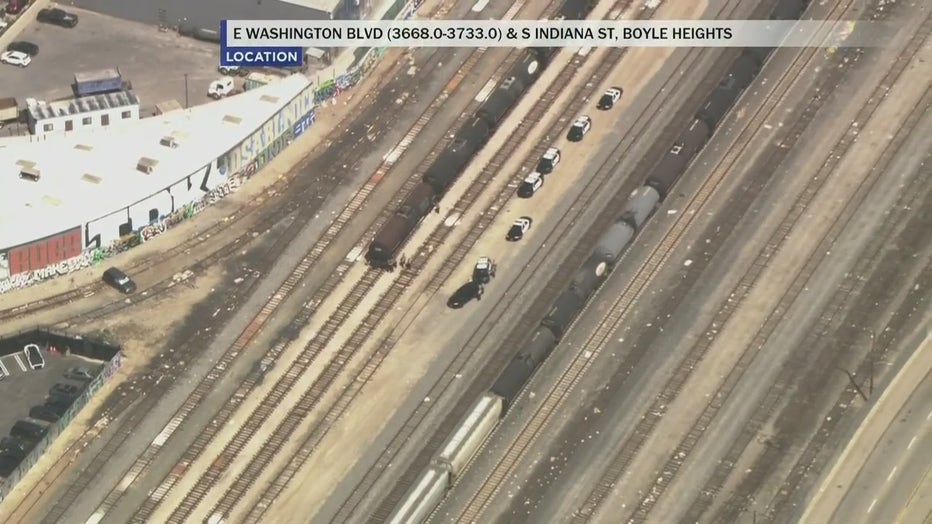 The driver of that black SUV eventually crashed through a fence and drove on train tracks in the Boyle Heights area. He then lost control of the vehicle and attempted to flee on foot.

SkyFOX spotted the suspect running across multiple tracks attempting to evade officers. It appears he briefly considered jumping on a moving a train.

He then went back inside the vehicle triggering a standoff. LASD deputies are staging near the truck with guns drawn. This is in the area of E. Washington Blvd. and Indiana Street.

LASD also called on its Special Enforcement Bureau to help with the deputies already at the scene in the lengthy standoff between authorities and the pursuit suspect.

“It’s like GTA in LA [every day],” said another on social media. “Sheeesh.”

Get your top stories delivered daily! Sign up for FOX 11’s Fast 5 newsletter. And, get breaking news alerts in the FOX 11 News app. Download for iOS or Android.

Tune in to FOX 11 Los Angeles for the latest Southern California news.