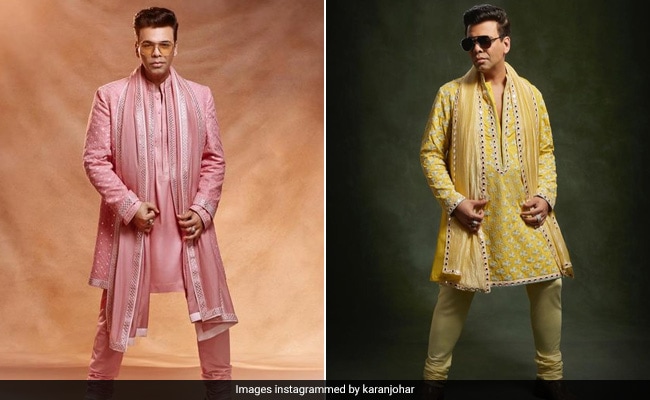 Karan Johar attended Alia Bhatt and Ranbir Kapoor’s pre-wedding and wedding festivities. The couple got married on April 14 and Karan attended the functions, looking his best. On Friday, the filmmaker shared his looks from the wedding and his caption has caught everyone’s attention. Karan Johar captioned the photos as “Shaadi Tayaar … dil me bahut saara pyaar … dhal gayee jawaani … but mid-life crisis hai to pehen liya Manish Malhotra ki sheravani! Chand Jaisi Alia Raaja humare RK! Rab ne bana di jodi woh bhi saj dhaj ke! (Wedding ready, a lot of love in my heart, the days of youth are gone but since I am in a mid-life crisis, so I chose to wear a sherwani by Manish Malhotra. Alia is like a moon and Ranbir is like a king, this union is made by god himself)” Karan Johar is 49 and single and he is often seen celebrating his singlehood with his quirky captions and photos, just like this one.

For Ranbir Kapoor and Alia Bhatt’s wedding, Karan Johar wore a pink sherwani with a matching dupatta. And for the mehendi, Karan looked dapper in the yellow mirror worked sherwani, and completed the look with sunglasses.

Check out the photos:

After Ranbir Kapoor and Alia Bhatt’s wedding, Karan Johar wrote a heartfelt note for the newlyweds. Calling Ranbir, his son-in-law, Karan wrote, “It’s days like this that we live for …where there is the most beautiful blend of family, love and absolute emotion….. overwhelmed and so full of love in my heart… my darling @aliaabhatt this is such a beautiful life step and my love and blessings go with you everywhere … Ranbir! I love you… now and forever! You are now my son in law…badhai ho and here’s to decades of khusiyan (happiness).”

Alia Bhatt made her Bollywood debut with Karan Johar’s Student Of The Year and they share a close bond. The Raazi actress is often seen thanking Karan and calling him, her mentor. Ranbir and Karan have also worked together in films like Bombay Velvet.

Next, Alia Bhatt and Ranbir Kapoor will be seen in Ayan Mukerji’s Brahmastra, which has been directed by Ayan Mukerji