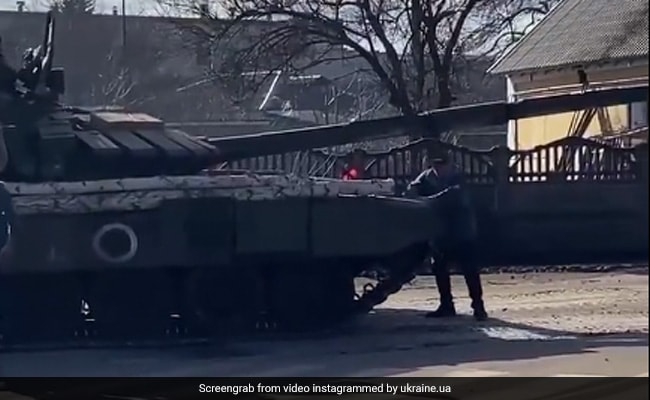 The video is just one of many stories of human courage and perseverance shared online recently.

A Ukrainian man was seen stopping a Russian tank with his bare hands in the streets of northern Ukraine’s Bakhmach, in a powerful video shared by the country’s Ministry of Foreign Affairs today.

Posted on Instagram from Ukraine’s official handle, the video depicts a citizen rapidly being pushed backwards on a street by a massive Russian tank. Yet, placing his bare hands against the front of the moving vehicle, the man pushes back on the tank with the force of his body-weight until it slows to a stop.

Following the feat, the man falls to his knees in the middle of the road as local residents rush towards him. The tank was reportedly part of a Russian convoy passing through the town of Bakhmach on Saturday, the third day of the Russian invasion.

Lauding the courage of Ukraine’s residents, the ministry shared another video on their Instagram in which the same man is initially seen hanging from the front of the Russian tank before he jumps down and halts its progress altogether.

“Russia has been lying for years about how the Ukrainian authorities are keeping the people of Ukraine in ‘captivity’. The reality is, though, the Ukrainian people are free and ready to stop Russian tanks with their bare hands if need be,” read the post’s caption.

The video is just one of many stories of human courage and perseverance shared on social media in the past few days, as Ukrainian civilians go up against trained Russian troops daily in the unfolding Ukraine conflict.

In one video circulating online, a Russian tank skidding across the road ran over a moving car in Kyiv, trapping a civilian driver inside who miraculously survived the crash. In a similar story of bravery and survival, reports have emerged of a group of Ukranian troops — previously believed dead after they defied Russian warnings to surrender and instead told the Russian Navy to ‘go f**k’ themselves — apparently being alive and instead taken as prisoners.

In a less positive outcome, the Ukranian military on Saturday mourned the loss of a Ukrainian soldier who blew himself up to destroy a bridge in Kherson, but hailed his sacrifice as he attempted impede Russian tanks from marching forward.

Ever since Russia launched full-scale invasion of Ukraine on Thursday, more than half a million people have fled the country, as per UN’s refugee arm, while at least 352 civilians, including 14 children, have been killed, according to Ukrainian authorities.

Massive anti-war protests have been seen across the world, including a Berlin demonstration of 100,000 people. As public outcry intensifies, not just worldwide but also within Russia, the police has detained over 5,500 people across 48 Russian cities in various anti-war demonstrations since the start of the invasion.